Our Mission: To promote prosperity and a vibrant community by serving as the voice for West Olympia business.

Our Vision: To provide an organization for the members of the West Olympia business community to join together to promote a political, economic and social atmosphere of mutual support so that all West Olympia business people may pursue their economic goals with dignity and respect from their fellow businesses, government, and the community at large. 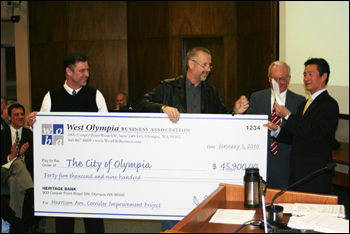 WOBA representatives present an enlarged check to the City of Olympia for the WOBA contribution upon completion of the Harrison Avenue / Mud Bay Road Improvements.

Each year, the West Olympia Business Association assesses progress on previous goals and establishes new goals and objectives for the future. Grounded in the mission of the organization and the needs of member businesses, these goals create focus and achievable measures of progress toward achieving the mission. All members have a voice in the goal and objective setting process and opportunities to participate in fulfilling the work plan.